Located just thirty miles southwest of Lubbock, Brownfield had is start as an agricultural community that grew into the city it is today. 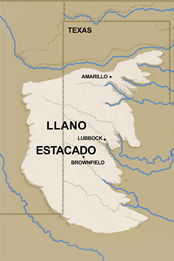 Brownfield is at the junction of U.S. highways 62, 82, 380, and 385 and State Highway 137, forty miles southwest of Lubbock in central Terry County. In 1903 town promoters W. G. Hardin and A. F. Small arrived in Terry County planning to turn Smalls few hundred dollars into thousands. The two men bought the county’s center lot from A. M. (Dick) Brownfield and began to plat the site, giving every voter in the county a lot in order to enhance the town’s chances of becoming the county seat; they named the town after a prominent ranching family.

The founders donated one block each for the courthouse, the school, and churches. J. R. Hill, the first to arrive with his family, built Hills Hotel, the first business establishment, on the north side of the square. On April 1, 1903, Hill opened the first post office in his hotel building and became the first postmaster. The settlers lived in tents, covered wagons, or dugouts until construction materials for houses could be hauled from Big Spring or Colorado City.

A school was built, and since there was no money for a teacher or equipment it served as a dance hall, church, and general gathering place until 1905 when the first school term began. On June 28, 1904, Brownfield was voted county seat by a slim margin over the larger and older town of Gomez.

The Terry County Voice (later named Terry County Herald) moved to Brownfield from Gomez a few weeks after the election. The Brownfield State Bank was established on October 7, 1905, to serve Gaines, Terry, and Yoakum counties, as well as parts of the eastern New Mexico, since the area had no convenient banking services.

With the coming of the automobile in 1910 and the railroad in 1917, the town and county experienced rapid growth. To encourage the building of a railroad from Lubbock to Seagraves, the citizens donated the right-of-way and station grounds to the South Plains and Santa Fe Railroad Company. The town was incorporated in October 1920 with a population of 1,200.

During the Great Depression, the William Randolph Hearst interests moved into Brownfield, then in the best corn-producing area of West Texas, and 10,000 cattle were finished for the market that same year. For a number of years, cattle were shipped to Brownfield from Mexico to be fattened.

Agriculture development was the major source of population growth until 1937, at which time 3,100 people lived in the town. By 1940 Brownfield was the leading grain center on the South Plains and an important part of the economic development of the northern Permian Basin. By 1941 four oil wells were in operation, and more were expected. In 1950 diversified agriculture was still the main occupation, but oilfields had attracted petroleum industries as well.